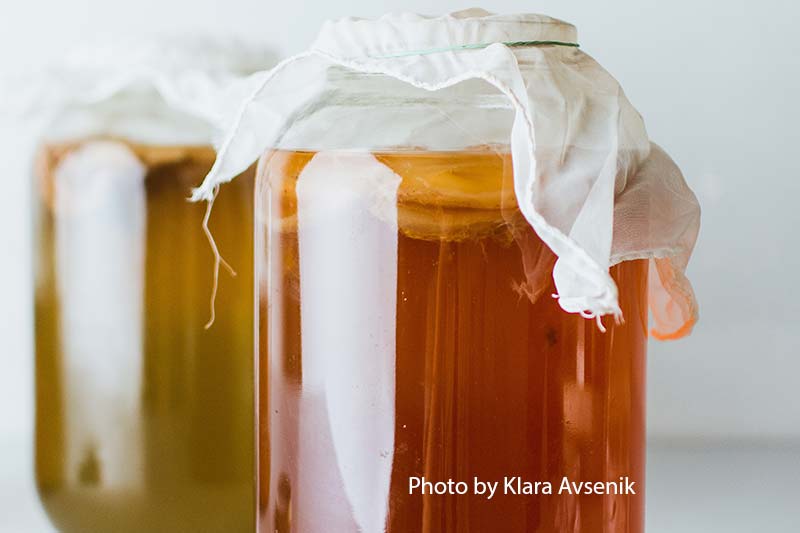 The culture contains a symbiosis of Acetobacter (acetic acid bacteria) and yeast, mostly Brettanomyces bruxellensis, Candida stellata, Schizosaccharomyces pombe, Torulaspora delbrueckii and Zygosaccharomyces bailii. The culture itself looks somewhat like a large pancake, and though often called a mushroom, or by the acronym SCOBY (for "Symbiotic Colony of Bacteria and Yeast").

In every step of the preparation process, it is important that hands and utensils (anything that is going to come into contact with the culture) are dish soap clean so as not to contaminate the kombucha. Kombucha becomes very acidic (in the neighborhood of pH 3.0 when finished) and so can leach unwanted and potentially toxic material from the container in which it is fermenting. Food-grade glass is very safe and besides glass, acceptable containers include china, stainless steel, and food-grade high-density polyethylene (HDPE) and polypropylene (PP).

If a mold does grow on the surface of the kombucha pellicle, or "mushroom", it is best to throw out the batch and start afresh.

Kombucha was found out that can cure various diseases and problems like joint inflammation, heart attack, hemorrhage, Cataract. It relieves menopausal symptoms, PMS, lowers obesity and detoxifies organism, reduces gallstones, strengthens kidneys, cures diabetes, insomnia, helps with bowel activation… and with all that it keeps vitality and increases physical and mental capabilities.

It is much appreciated with athletes because it works as a natural stimulant during higher sports strains. During the strains, metabolism of lactic acid is disturbed, acid has a tendency to precipitate in salts lactates in muscles and that can cause fatigue and pain. Kombucha reactivates lactic acid that then can exit from muscles than be activated into pyruvic acid that can be used in acquiring energy from the body. It also has effects on the intestines especially when they are disturbed, which can be than positively seen in the overall health of the body and the skin.

Pots and other materials

Taste of prepared brew is a little bit sour.